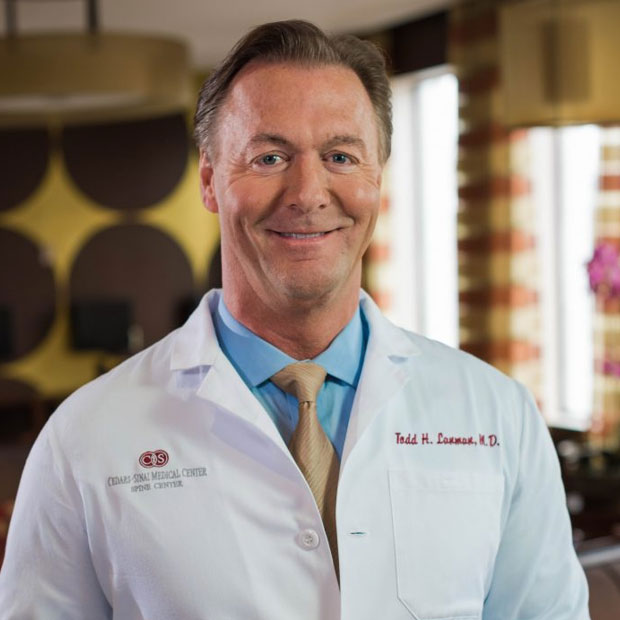 Chronic back and neck pain affect all aspects of life and can make quality living very difficult. The prodisc Total Disc Replacement System is a tool I use, giving my patients the option to thrive and maintain the highest quality active lifestyle.

Interests: Hiking, Swimming, and Playing Tennis with His Daughter

Dr. Todd Lanman established his career as a world-renowned neurosurgeon specializing in the advancement of spinal health and spine surgery. For 30 years, he has been passionate about innovation and holistic patient care, Dr. Lanman has been the principal medical investigator on multiple clinical trials for motion-preserving surgeries and artificial disc replacement devices, including the prodisc Total Disc Replacement System. His passion leads him to examine all areas of his patients: not just spine and joint health, but also their overall well-being, age, lifestyle, nutrition, and physical activity. Dr. Lanman is also a patient living his own spine health journey. He has experienced many of the nonsurgical and surgical procedures he prescribes for his patients.

“The pain took me out of a lot of active things that I would have done normally. Pain like that affects your mood and relationships since you’re a little edgier.”

His personal journey began in 2004 when his active lifestyle was compromised by back and neck pain due to a herniated disc. The initial herniation caused nerve impingement and severe pain and numbness that radiated from Dr. Lanman’s neck and shoulder down his arm. He subsequently underwent a cervical procedure—a one-level fusion surgery. At that time, total disc replacement had not yet been approved by the Food and Drug Administration (FDA).

In the meantime, Dr. Lanman battled lower back, hip, and leg pain, which he initially managed with physical therapy and a fitness program specifically tailored to strengthen muscles along his spine. Eventually, his back pain and discomfort worsened. A subsequent MRI in 2006 revealed severe degenerative disc disease in the lumbar region.

Initially, Dr. Lanman tried numerous nonsurgical treatments, such as nerve blocks, injections, epidurals, anti-inflammatory medications, and even pain killers on days that were “really bad.” He recalls, “The pain took me out of a lot of active things that I would have done normally. Pain like that affects your mood and relationships since you’re a little edgier.”

Lumbar surgery was his next step, and Dr. Lanman turned to a total disc replacement procedure with prodisc L, which he was very familiar with as a clinical study investigator and spine surgery practitioner.

Dr. Lanman underwent a total disc replacement procedure with prodisc L in 2008. Feeling immediate pain relief following the procedure, he was able to return to work in the OR after only one week.

Throughout his recovery, Dr. Lanman walked daily and started physical therapy after 8 weeks. Although he initially struggled with some lower back soreness and difficulty finding a comfortable position to sleep, within a couple of months he felt great. Dr. Lanman exclaimed, “By 6 months post-op, I felt like I was functioning at 100%—and, I even gained 1 3⁄4 inches in height!” He was also able to return to his favorite activities like snowskiing, hiking, swimming, surfing and his full workout programs.

“With prodisc C, I am able to return my patients to full activity usually within 3 weeks.”

Following prodisc L, Dr. Lanman experienced a resurgence of neck and arm discomfort and underwent a second cervical procedure: a total disc replacement procedure with prodisc C in 2014. Like prodisc L, Dr. Lanman experienced immediate pain relief and was able to return to work the day after surgery. Within a couple weeks, he had returned to full activity, including exercising and participating in his favorite hobbies. According to Dr. Lanman, “With prodisc C, I am able to return my patients to full activity usually within 3 weeks.”

Today, Dr. Lanman is pain-free and has no limitations! He is back to living life to its fullest and enjoying hiking, swimming, and playing tennis with his daughter. He continues to be an advocate for restoring mobility with the prodisc Total Disc Replacement Systems and offers a unique perspective to his patients.